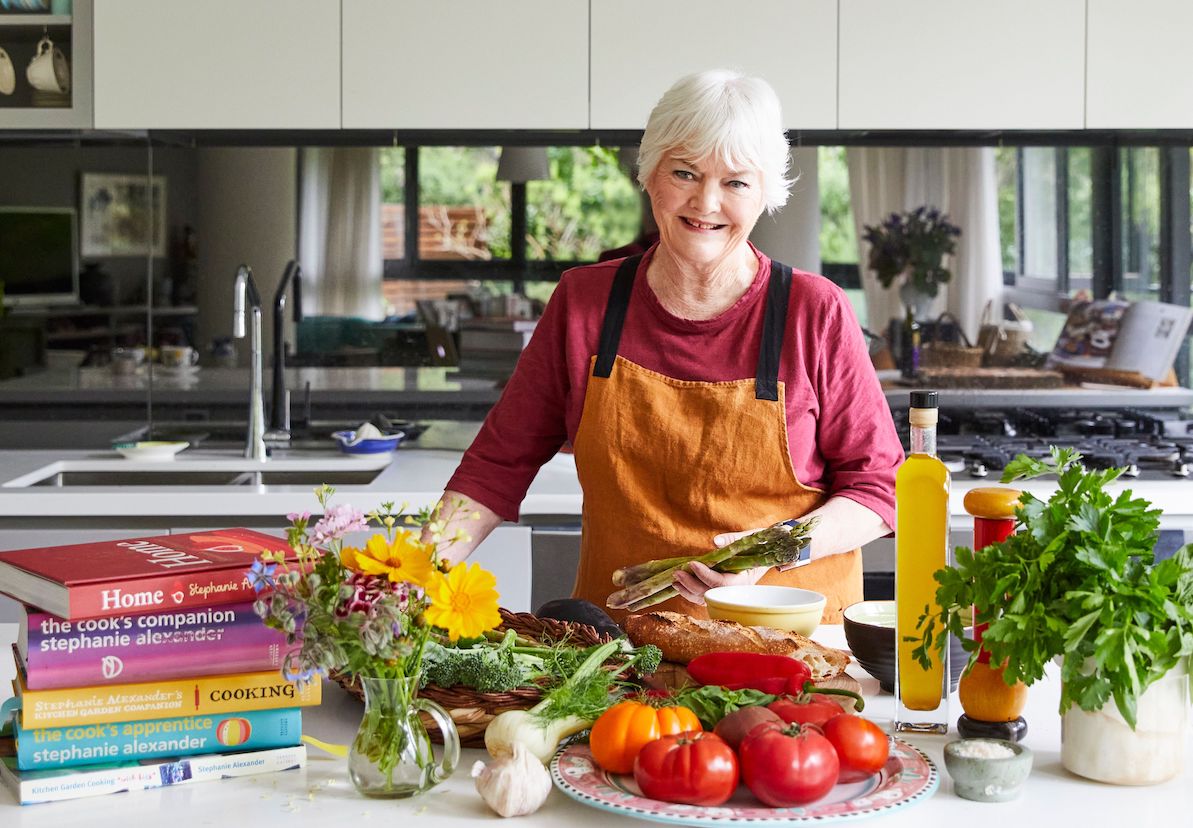 Sharing the joy of preparing and eating fresh, seasonal food has been the driving force behind Stephanie Alexander’s inspirational career as a food author, restaurant owner, chef and, founder of the Stephanie Alexander Kitchen Garden Foundation.

For Stephanie, meals with family and friends – the shared table – is at the heart of her approach to food. She describes food as the “first colour in my life ... certainly it was the taste, but so much more as well. It was the conviviality, the invitation to be together with my mother and share in the kitchen doings, the passing-on of her kitchen wisdom, the gathering of family, the sense that if all else was sinking there would still be food.” Theirs was a multi-generational shared table, with music and books, discussion and argument and, of course, the lovely food cooked by her mother, which they ate sitting at the large round table made by her dad.

Stephanie’s Restaurant and The Cook’s Companion

For 21 years from 1976 to 1997, Stephanie was the force behind Stephanie’s Restaurant first in Fitzroy then Hawthorn, an establishment credited with having revolutionised fine dining in Melbourne.

Chef Damien Pignolet describes a neighbourhood restaurant where “real food was being served without fads, seriously genuine and superbly executed.” In a precursor to the Foundation’s work, the restaurant included its own small kitchen garden, growing herbs like parsley and sage, and menus were planned around what was in season. Chef Neil Perry describes how his time at the restaurant taught him to respect and do the simple things well, to use and appreciate the best ingredients: “I learnt the importance of washing and drying lettuce – you would think such a small thing, but so important that it has stayed with me ever since.”

Stephanie was also known for seeking out unusual ingredients (for example, she describes using the blossoms of Grevillea pteridifolia to produce a “haunting honey-like sorbet”, or steaming marsh samphire, which a friend gathered near Geelong, to serve alongside fish) and for building relationships with small producers to supply them. One such producer was organic farmer Daniel Romaniex who “turned up one day at the back door with salad greens to die for” - unusual varieties for that time such as soft-leaf mignonettes, oakleaf and frisee leaves. Farm-to-table chef Annie Smithers, who worked at Stephanie’s Restaurant in the 80s, says that Stephanie’s “support and respect for farmers still resonates with me and guides my practices today.”

Stephanie’s Australian cooking classic, The Cook’s Companion, was first published in 1996 (the orange-covered edition), with a revised (stripy) edition published in 2004 and updated again in 2014. This was a cookbook with a difference, organised around ingredients rather than meal types – once more cementing Stephanie’s focus on produce – and designed to provide both basic methods for new home cooks and inspiration for all. Stephanie says, “Overwhelmingly, my main aim has been to remove anxiety from what should be a joyful part of life, to clear up mysteries and make cooking accessible to all.”

Annie Smithers describes “a book that showcases both Stephanie’s extraordinary knowledge about food and also her incredible organisational feats that come from her librarian-shaped mind.” (Stephanie trained as a librarian and worked as one in between her restaurants, including six years at Princes Hill Secondary College in Melbourne.)

The back cover sums up the book as covering “the food that Stephanie Alexander cooks for her family and friends and the recipes she learned from her mother.” Stephanie talks about her mother’s cooking and its influence on her in another of her books, Kitchen Garden Cooking with Kids: “Mum’s curiosity knew no bounds and she was game to try anything at all and substitute if an unusual ingredient could not be found locally.” She describes how her mum cooked “heaped bowls of home-grown vegetables or vegetables from the newly discovered Italian greengrocer” along with Polish dishes, Austrian dishes, Chinese cookery or “a searing curry after a trip to Sri Lanka.” This experimentation and connection with different cultures – often brought back after travels in Stephanie’s case – marks Stephanie’s food as well.

“I think we all know that many of us have good ideas that we would like to get out into the world, but Stephanie has not only had the vision, but executed an amazingly complex feat by getting the Kitchen Garden Program into so many schools nationally. It has been done with the will and tenacity that she has shown me these last 36 years.”

The Kitchen Garden Program began in 2001. Stephanie’s Restaurant had been sold and Stephanie was a partner in Richmond Hill Café and Larder, which she says was a shared responsibility that “did not feel particularly onerous.” The time was right to either “sit back and do all that reading I had promised myself for years” or take on another huge challenge.

Clearly, she chose the latter. She says: “I felt I could still make a contribution to a richer, more joyful food life for many more Australians, especially children.” The idea for a kitchen garden program in schools came from her frustration with the official response to childhood obesity statistics and poor eating habits: “another pamphlet or set of guidelines, or endorsing a tick on certain grocery items … I could look back 20 years over a trail of similar initiatives and yet the numbers of overweight children had continued to rise. The cautionary and negative approach had failed.”

Stephanie’s idea was simple. “It seemed that an intervention in primary school was the best way of changing behaviour. And behaviour is much more likely to change if the alternative is seen as pleasurable and possible.” With influences from Alice Waters and her Edible Schoolyard project in California, so began Stephanie’s active involvement with the kitchen garden movement, with a trial project co-created with the staff, student and families at Collingwood College.

Stephanie says: “Typically, I ignored all the reasons why such an idea would be difficult to achieve: Who would fund, build and manage the garden? How would this program fit in with the rest of the curriculum? Would there even be time in the curriculum for gardening classes? And if so, who would teach these classes?”

Stephanie’s starting point was “nothing more than a belief that the idea could work, along with the refrain ‘Just do it!’”

Kitchen Garden Cooking with Kids tells the story of how she and her many collaborators ‘just did it’, transforming her simple idea for pleasurable food education for children into a “vigorous reality” in the pilot kitchen garden at Collingwood College, in inner-city Melbourne. The kitchen garden has now been running there since 2001 and is still going strong today, providing the program to school years three to six.

Fast forward and the program has continued to evolve under Stephanie’s guidance to expand beyond primary schools, into secondary schools and early childhood services, providing a continuum of pleasurable food education. The model now guides a more flexible approach: schools and services can start small, with just a bed of herbs, say, but always with a shared table to bring the joy of sharing good food into young people’s lives.

In November 2021 the Kitchen Garden Program celebrated 20 years and Stepahnie reflected: "The highlight has always been the pleasure the children receive from this program. They tell me so,  their faces beam, they are full of energy. I love the fact that the program is so inclusive, and every kid, regardless of background, size, shape or anything else can be fully engaged with this program."

I marvel at the way the Kitchen Garden Program has grown and grown. It’s all about community: initially a small band of friends and acquaintances came together with a vision to create a program that really delivered change. The success of the initial program led to its rapid growth and it has now become a renowned nation-wide program reaching children and young people at all stages of education.

A huge contribution to the food industry in Australia

In 2014 Stephanie was made an Officer of the Order of Australia (AO) both for her work in the kitchen garden program “promoting improved food and eating choices for children”, and as an author.

The many messages on her 80th birthday from food industry luminaries highlight her standing in Australia’s food culture (see links at end). Chefs such as Maggie Beer, Tony Tan, Neil Perry, Kylie Kwong, Annie Smithers and many more describe friendships borne of a shared love of good food, and a commitment to the food industry in Australia.

“Stephanie has offered and taught me so much over these years, not just about the pleasures of planting, growing, harvesting, cooking, eating and sharing food and the vital role of the restaurateur; but more so, about the importance of sustainability on every level, about being an authentic role model within the hospitality industry, and on the importance of making one’s practice an ongoing, valuable contribution to the community as a whole.”

Many of Stephanie’s books are available from the Foundation's online shop.

First published on the Shared Table, our online member portal, which is full of hundreds of resources, plus community sharing and inspiration for running a unique kitchen garden program at any school or service.

Photograph at top by Armelle Habib.