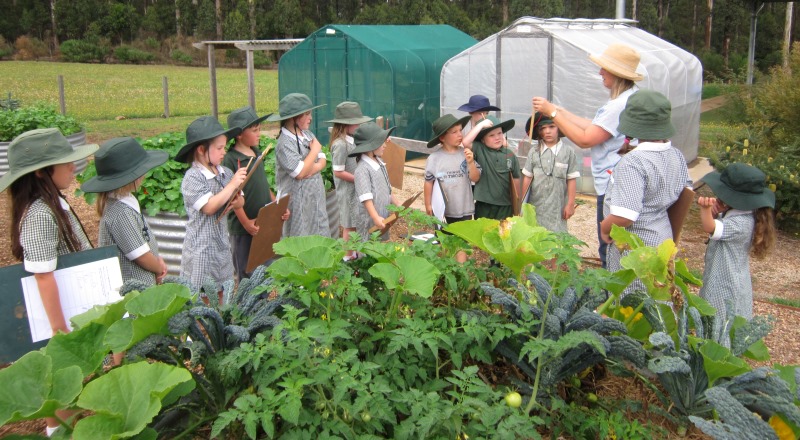 The Foundation’s Stacy Allen recently visited a new Kitchen Garden Classroom member school in the hills north of Melbourne. This is her story of the school’s incredible journey of renewal …

The weather as I drive up to Middle Kinglake Primary School on a sleety winter’s day couldn’t be more of a contrast to the fiery inferno of a day that wiped out the school on 7 February, 2009. On Black Saturday the temperature topped 46°C, and wind speeds of up to 120km p/h spread the fire through the stunning landscape.

The blackened trunks of the trees now lining the winding road to the school are a stark reminder of the devastation of that day. But they are covered with fluffy new growth, and just as the vegetation has regrown so has the surrounding community.

I pull up in the carpark and walk into the bright new school building, which has replaced what was burnt to the ground in the fire. The open plan building has four classrooms, all opening into a shared space that on this cold, rainy day is filled with the happy chatter of  students spending a ‘wet-day timetable’ lunch inside.

I’m warmly welcomed by teacher Karen Faulwetter and as we sit in the staffroom enjoying a cuppa I hear of the school’s resurrection. The school, established in 1898, not only lost its buildings on Black Saturday but also students and parents from its community. The fires took the lives of 173 people in Victoria, including 120 from Kinglake, and 2100 homes were destroyed. 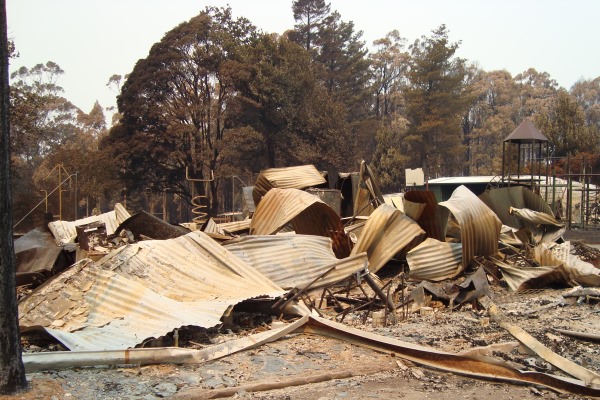 Before the fires the school had 150 students, but that has dropped to 56, as many families have left the area. In the first weeks after the fires the students were moved to surviving local schools, until a temporary school was built on the site of the old Kinglake community tennis courts using portable classrooms.

Before the fires the school had planned to start a veggie garden, so in an effort to brighten up the temporary school Karen started a garden project. She contacted the Eltham Bunnings outlet for help, who donated raised veggie garden beds and held a working bee to help set up the garden. Even some of the Bunnings national managers (in Melbourne for a conference) rolled up their sleeves to help install the garden beds. After 18 months in the temporary school buildings they were able to move into their newly re-built school and the garden came with them thanks to more help from Bunnings and secondary students from Woodleigh School in Baxter. Karen said the Kinglake Landcare group had also been a great help with setting up the garden. 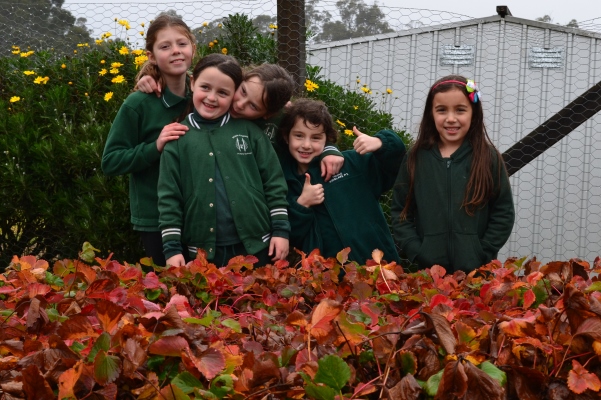 Karen and members of the school’s Sustainability Team proudly take me on a tour of the well-established garden, which includes raised veggie beds, fruit trees, a greenhouse and a chookshed that is home to chickens and a duck. The school garden is also home to frog ponds, pet guinea pigs in a hutch, a cubby house (made as a replica of the old school building), a fairy garden and a butterfly garden with a path of mosaic tiles made by the students and placed in the shape of a butterfly. Karen said next on the wishlist is a wetlands area to support local wildlife.

After our tour of the garden we escape the wintery drizzle and retreat into the school’s Out of School Hours Care kitchen, where they do their cooking. The kitchen – part of a large building housing a basketball stadium, art and music room – has all the basics and opens out onto an area with four large tables. 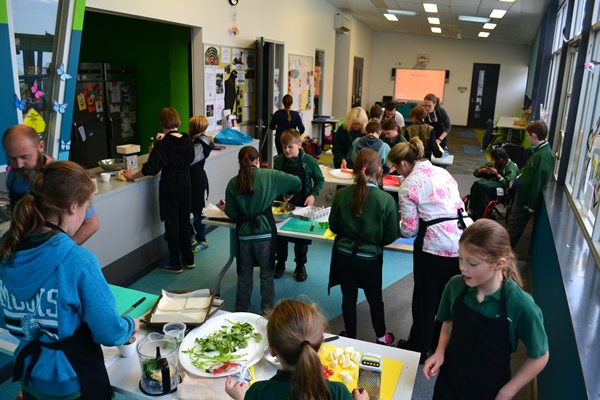 The school is split into three classes – Prep and Grade 1; Grade 2 and 3; and Grade 4, 5 and 6 – and today it is the older students who are taking part in the kitchen class. The 14 students are split into four groups – Bonkas Bananas; Baby Bananas; Positive Pineapples and Groovy Grapes – and assigned a table and dish to prepare. Each workstation comes with an adult helper; today there are two school aides (Michael and Annie), volunteer aide Kylie, former student Molly (who is now a Yea High School student and doing a school-based traineeship one day a week) and volunteer local chef Mikey Libreri.

On one table the Bonkas Bananas get busy preparing tarts topped with pesto made from school-grown basil and tomatoes, topped with bocconcini. On the next table the Groovy Grapes grate zucchini and cheese, chop silverbeet and crack eggs for a frittata. The Positive Pineapples pick salad leaves and edible flowers and shake up a herby dressing for a green salad, and the Baby Bananas get stuck into kneading up a batch of soda bread. There’s lots of happy giggling from the students about their dough-coated hands. 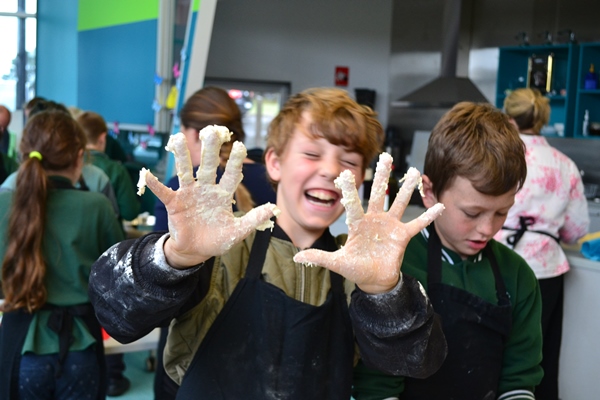 Once everything is in the oven, the tables and dishes are cleaned and the students retreat to the other end of the room to write about the recipes they’ve just prepared in their kitchen journals. I wander the room chatting to them about what they like about kitchen garden classes, and hear glowing reports …

“I think that cooking and gardening is fun, and we have a chance to make things that we’ve never tasted before like gnocchi, bocconcini tarts and new pizzas with things like sweet potato and zucchini on them,” Grade 4 student Paige said.

“In the garden I mainly like putting little seeds in the big trays and weeding, they’re my favourites,” said Grade 4 student Jessica. 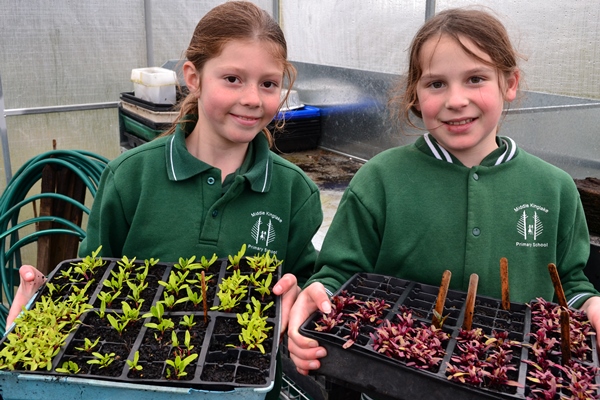 The children said they also liked to cook at home and many also have their own veggie gardens.

“I like eating tomatoes straight out of the garden,” Grade 5 student Zak said.

After the tarts and soda bread are removed golden from the oven everyone sits down together to enjoy the fruits of their labour. The students tuck into the food, with one heading back for thirds of the bocconcini tarts – which everyone agrees is their favourite dish of the day. 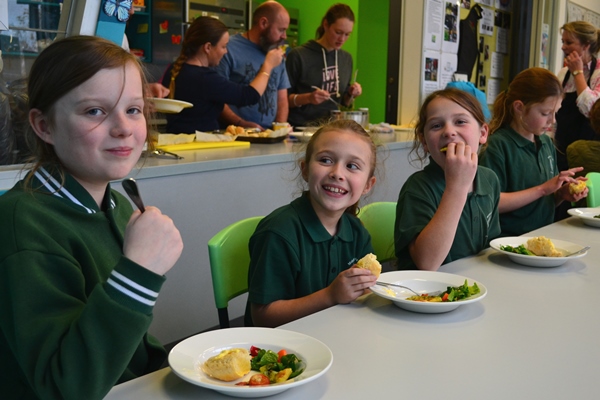 Volunteer chef Mikey said he had long wanted to be involved in a kitchen garden program as he believes cooking is a vital skill for children to learn.

He loves seeing the children come back for third servings of what they’d cooked and how they were all encouraged to try new things, as they’d grown and prepared the ingredients themselves. 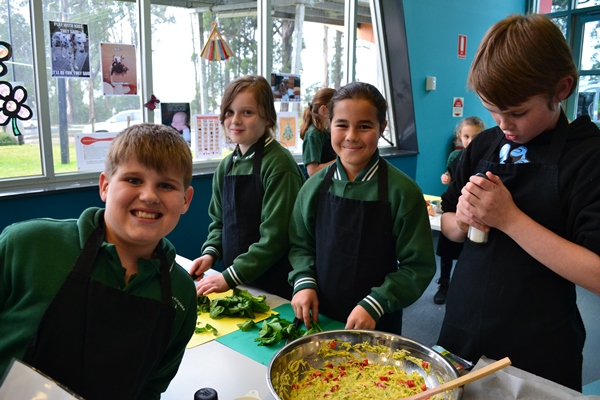 The weather is still cold and drizzly as I leave the school, but I’m filled with a warm glow – both from the delicious meal I have just shared with the students and helpers, and the passion of a school community finding a way to grow in the face of such adversity.

Find out how your school or centre can join the Kitchen Garden Classroom.

If you would like to volunteer at a kitchen garden program then head to our map of the Kitchen Garden Community to find your local kitchen garden school or centre.