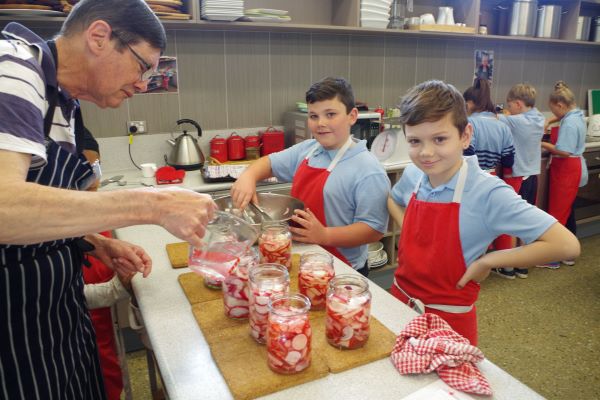 In 2003 Peter Arnott read an article in the paper about the first ever Kitchen Garden Program at Collingwood College, which was still in its fledgling years. Peter, who had been a teacher for 30 years and had just finished a course in hospitality, was interested in learning more about the program, which married his dual interests of education and food. He got Peta Heine, the school’s kitchen garden specialist on the blower, and the rest is history.

Eighteen years later, Peter is still volunteering his time to help kids learn how to grow and cook. Since moving to Tasmania to be closer to his grandkids, he’s now at Moonah Primary School where he enjoys being able to volunteer alongside people with similar interests who “share recipes and experiences.”

After retiring, Peter decided he would dedicate his time to volunteering rather than seeking part time work or taking up relief teaching shifts. It gave him a chance to give something back to the community and forge new connections. “Volunteering in the kitchen garden program at Collingwood College provided the opportunity to do something within my own local community,” Peter explains. “And from the start I felt welcomed and comfortable.”

Over the years, Peter saw a positive shift in the food habits of the children at Collingwood College.

“Working in the classroom allowed me to see that most children were bringing things like packets of chips and sweet biscuits for playlunch, and similarly poor choices for lunch. By the time I left there had been a big change with children eating cheese, carrot sticks and fruit for playlunch, and much healthier options for lunch. I am sure the kitchen garden program helped bring about this change.”

Another plus of volunteering in classrooms meant Peter got to spend time with the parents and hear how students were adopting the things they learned at home.  “It was very gratifying when I was told things like: ‘Olivia cooked the dish that she did with you on Wednesday for the family, and we all loved it’,” he remembers.

Working alongside Collingwood College’s long-time kitchen garden specialist Desely Insall, Peter also picked up a few recipes along the way, diversifying the ingredients he uses. “One of my favourite foods is soup. Two of Desley’s recipes from Collingwood I still make regularly. They are Sweet Potato and Red Lentil Soup, and Green Lentil and Mint Soup. Before I started volunteering at Collingwood, I had rarely had beans and grains in my regular meals. I now use chickpeas, lentils, couscous and polenta in both hot and cold dishes.”

As the Kitchen Garden Program celebrates its 20th anniversary, we’d love to take a moment to thank the dedicated volunteers like Peter who have nurtured the program along the way. Their support has helped grow the program from a single plot of garden at Collingwood College in 2001, to 1600 schools and services around the nation, enabling thousands of young people to form positive food habits for life. Thank you, Peter!

Read the touching farewell to Peter from Kitchen Garden Specialist Desley Insall on the Shared Table, after 13 years volunteering at Collingwood College.